The itinerary starts in Biassa, one of the oldest hill communities in Spezia. Easily reached by bus, the town is an important hub for excursions into Cinque Terre National Park, but it is also a popular destination for city foodies who appreciate the panigacci and home cooking.
If you want to take a walk, follow the road marked with number 3 near the church of San Martino. After passing under the chestnut trees and maritime pines you will arrive at Colle Del Telegrafo. At this point continue on to marker 1, which will take you up to the other side of the Cinque Terre.
The winding path follows the ridge, reaching Monte Capri’s 785 meters. Near this summit there is one of the oldest records of man’s presence in the area: a menhir from the megalithic era. The pathway will take you through groves of maritime pines and whins, and you will also catch breathtaking views of the sea, the town of Riomaggiore, and the coasts with their terraced vineyards. They are majestic panoramas, and on clear days it is possible to see the islands of Corsica and Gorgona.
After climbing to Monte Malpertuso the road turns back downwards, passing through Foce Drignana, over the town of Vernazza, all the way to Termine di Soviore, reaching the town of Colla di Gritta. This final part of the trail coincides with the road for Levanto. Path marker 1 will take you to a restaurant where it is possible to enjoy traditional Ligurian dishes from both sea and land.
A short distance from here, along the road to Levanto, you will find the entrance to path 12, which you should follow about half way. The first part follows a dirt road downwards through chestnut and pine trees. Once out of the forest, you will be welcomed by olive groves stretching from the coast to the town of Fontona. From here the path coincides with the old mule track, and at the end crosses a rock arch bridge. At this point the pathway returns to the provincial asphalt road to the city of Levanto, surrounded by the vineyards of Colline di Levanto Doc.
From the woods to the beach the path has taken you through the thousand facets of this stupendous region, a myriad of flavors found on a table garnished with dishes that for many years have maintained their delicious characteristics. Pesto, vegetable cakes, filled anchovies, mussels in marinara. Whether you choose meat or fish, finding the right wine for the meal will be child’s play. 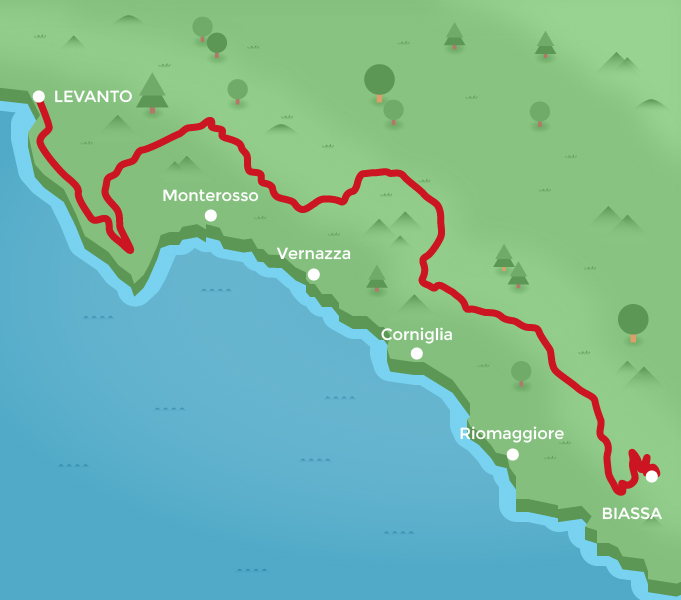 From the castles overlooking the sea to the Val di Magra

We saddle up at San Terenzo, a small village of sea and poetry, and pedal easily to Lerici along a path that inspired writers and romantic poets such as Byron and Shelley. From the sea emerges a breathtaking panorama on the opposing headland of the Poet’s Gulf, with Porto Venere and its islets, which sweeps to the left where rise villas with an aristocratic past and olive groves dotting the steep slopes.

Extra virgin olive oil, here as in the entire area, is one of the its main products together with wine. But it is from the sea that comes the product to which the town of Lerici has decided to pay homage at the end of every summer with a festival featuring food sampling, traditions, recipes and meetings. We are speaking of the Mytiliade, the annual festival dedicated to mussels which are the real treasure of the gulf, with offshore mussel farms in different areas.

On leaving Lerici we go up towards the Belvedere and immediately come to the crossroads to Tellaro.

We reach the end of our bike tour continuing uphill, but the view is certainly worth the effort. Tellaro, which rises on the rocks jutting into the sea, is on the list of Italy’s most beautiful villages. Among the enchanting views we cannot overlook the church surrounded by the sea, an edifice connected to a legend of centuries ago: an enormous octopus seized the church’s bell ropes and warned the population of the arrival of the Saracens. And the octopus is at the centre of the festival that enlivens the town’s evenings. Returning to the main trail, we come to the crossroads that leads to Montemarcello, another village on the list of Italy’s most beautiful villages. Situated at the end of the Caprione promontory, the town is splendidly conserved and a stroll through its narrow streets gives the impression of being part of a painting by a naive artist. In the surrounding area nature is the leading feature with the uncontaminated coves of Punta Corvo and the botanical garden of the Montemarcello-Magra Nature Park.

Immersed in greenery, we begin our descent towards Bocca di Magra. At a certain point the panorama opens up as if seen through a window overlooking the mouth of the river and the Apuan Alps, jagged and mysterious. Continuing along provincial road 30, we approach Ameglia, a town of Roman origins which reached its peak in the High Middle Ages and which today appears as a small, precious jewel. After crossing the Magra, on the left bank we come to Fiumaretta, prevalently a seaside resort, and after another two kilometres we come to the end of our bike tour at Marinella di Sarzana, with its important plantation. 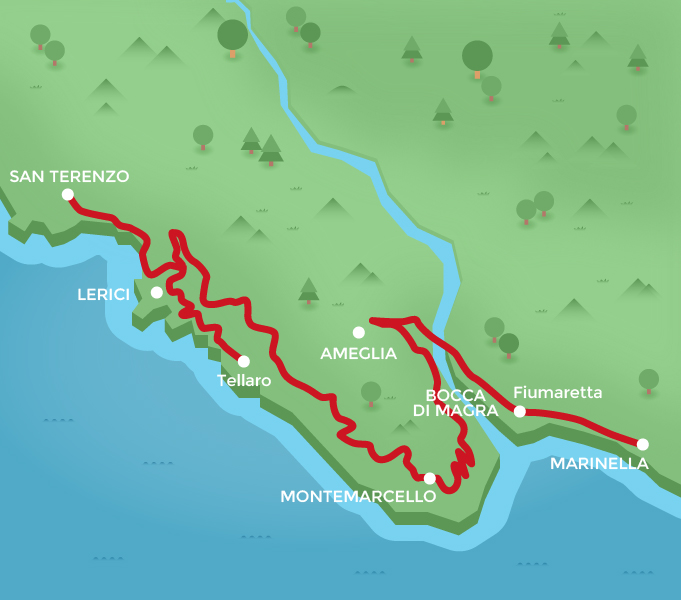 Our bike tour begins at Bottagna, where the rivers Vara and Magra join forces. We set off in the direction of Piana Battolla (Osteria Marchesi, Ceparana), after which we come to Cavanella and the ancient village of Oltre Vara. A short ride along the left bank of the river takes us to the bridge at Ramello and from there we return to the Aurelia road. We are entering into the heart of the Val di Vara, also known as the Organic Valley owing to its many crops and breeding farms all managed according to nature. It has a vocation for healthy foods rediscovered more than twenty years ago which has led to a tasty and much appreciated process of exploiting and marketing typical products of the area. After a few kilometres we come to Borghetto Vara and immediately after to Brugnato, once a bishop’s see, where we can stop for a visit to the town’s historical cathedral. Continuing alongstate road 1, we go through the small town of Sesta Godano, set on the slopes of Monte Gottero, the highest peak in the province, and then reach San Pietro Vara, an important crossroads leading to the lands belonging to Genoa.

Now the road takes us through fields and woodlands, with views of the Ligurian Appenines in the province of La Spezia, and then to Varese Ligure, the splendid “Round Village”. We cannot omit a stop here to rest body and spirit at one of the restaurants or holiday farms of the area. Here we find cheeses, vegetables, legumes, but also meat: local lamb and kid and the renowned black rooster. The food is almost all produced locally and is of local origin. Many of the products used and offered have been grown and raised in the fields of this green corner of Liguria for centuries and centuries.

Then back on the saddle to backtrack, at least till we come to Sesta Godano. We go on towards Carrodano and then, proceeding up a hill of regular slope we reach the Bracchetto Pass. Then we come to the Marian Sanctuary of Roverano and then downhill following the Pogliasca stream to Borghetto.

After reaching Padivarma and crossing the bridge over the Vara, we continue towards Beverino to visit the medieval village following the Val Graveglia. The Foce Pass takes us into the land of the village and here we have a choice: we can go uphill in the direction of Monte Parodi and then down to La Spezia with a view that ranges from the Apuan Alps to the Gulf, or go up to the Visseggi Pass and then down to the important parish church of Marinasco, dedicated to Saint Stephen, where we can admire a unique view of La Spezia’s town’s layout, hills and arsenal. 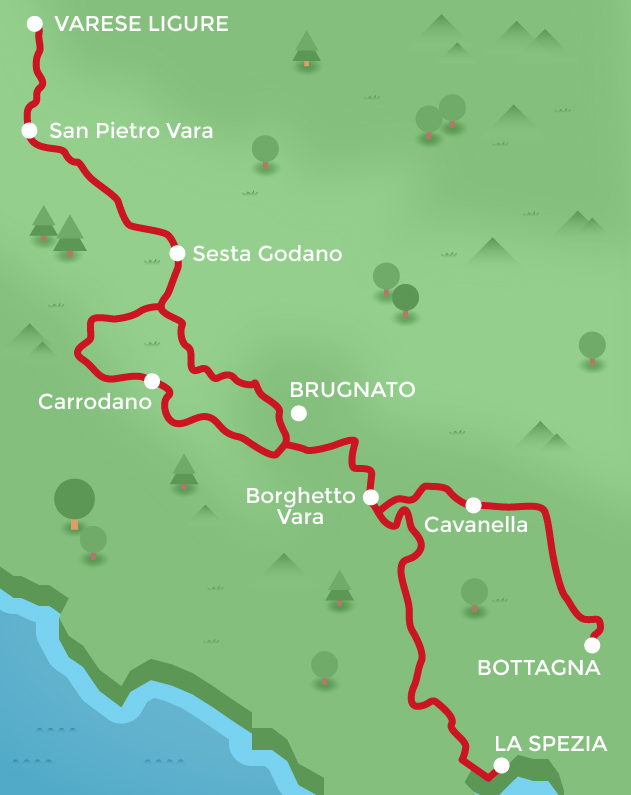 From Sarzana to Luni, pedalling through history

Our bike tour begins in Sarzana, a city whose origins go far back into the past but which looks ahead to the future. The old centre is a mixture of medieval architecture and 19th-century elegance, bearing witness to the most important periods of this city in the Val di Magra. There are other attractions we cannot overlook: those of the dining table. Sarzana stands in the lower part of the valley where we find the traditions of the Lunigiana hinterland full of flavours with a long history which we can enjoy in the products typical of the area such as panigacci and testaroli, the cold meats, cheeses, salty pastries and traditional winter sweets such as the spongata, all accompanied by red and white wines produced on the hills we shall visit along the way. So, back on our bikes, we leave the centre of Sarzana and go in the direction of the Fortress of Sarzanello, a stronghold that dominates the Magra Valley which was once a bishop’s see and often at the centre of conflicts in the area.

At this point we begin the descent that takes us to Caniparola, a town beyond the border between Liguria and Tuscany. After another hundred metres the border once again passes under our wheels as we take the road uphill towards the ancient village of Castelnuovo Magra. This town, which was awarded the Orange Flag by the Italian Touring Club, has an unmistakeable profile, with houses boxed in like jewels by the walls dominated by the keep of the ancient castle. From Castelnuovo we enjoy a breathtaking 360-degree view, but we cannot linger for long because a visit to the region’s public wine cellar awaits us, with its bottles that represent Liguria’s registered designation of origin wines.

The specialized personnel and professional sommeliers are on hand to offer us a taste of the wines, starting with the Vermentino produced in the nearby Luni hills.

Leaving the town, we return in the direction of the Magra Plain, where we take the Via Olmarello. After two kilometres we come to the crossroads that lead to the towns of Nicola and Ortonovo, or go downhill straight to the final destination of our tour, Luni’s archaeological area, which was one of the most beautiful and prosperous Roman colonies in North Italy, whose splendour derives from the use of the white marble of Carrara discovered by its inhabitants and the importance the town had in the economy with its strategic position. Today, that period of magnificence and power is borne witness to by the splendid amphitheatre and the many objects brought to light during excavations of the ancient town, its layout, temples and villas of the aristocrats. 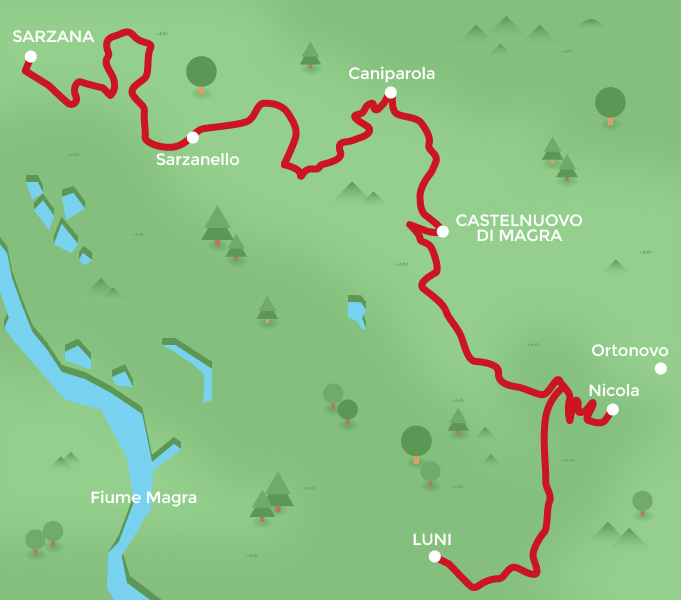